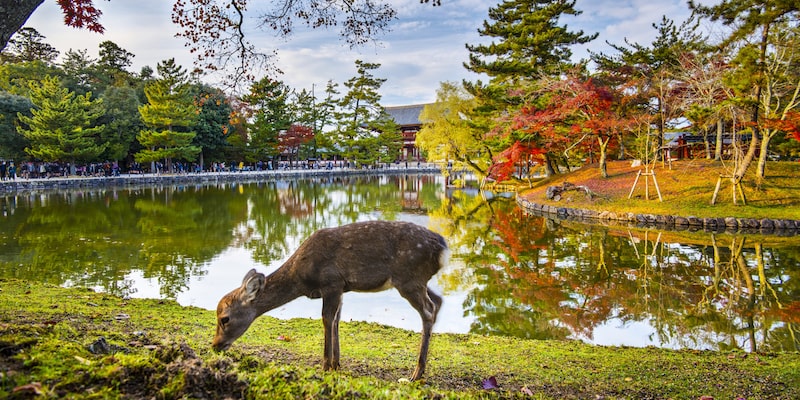 Nara (initially known as Heijo) was established as the first permanent capital of Japan in the year 710. However, the government decided to move the capital to Nagaoka in 784 because of the influence and political ambitions of the Buddhist monasteries. It moved once again to Kyoto not long after. Due to its history, the city is a must-visit for its historical treasures that include some of Japan’s oldest and largest temples. Below are some of the notable Nara attractions that you should visit during your trip there.

One of the most significant Nara attractions (and Japan) is the Todaiji Temple. Built in 752, the Buddhist temple became incredibly influential in the government affairs in a relatively short period of time. It became so influential that it is one of the reasons that the capital moved from Nara to Nagaoka in 784.

Today, the main hall of Todaiji Temple (also known as Daibutsuden or Big Buddha Hall) is the world’s largest wooden building. Not only that, it houses the Daibutsu (one of the largest bronze statues of Buddha in Japan).

The meaning of the name “Nigatsudo” is “second-month hall”, which refers to the second month of the lunar calendar. While Nigatsudo is actually within Todaiji temple, the sub-complex is used for a series of events held annually from March 1 to 14 called “Omizutori”. Similar to other long histories in Nara, Omizutori has been held annually for over 1,250 years.

One of the most spectacular events during Omizutori in this Nara attraction is “Otaimatsu”. Otaimatsu is where burning embers shower down from giant torches (ranges anywhere from 6 to 8 meters in length) held from the balcony.

As the most celebrated shrine in Nara, Kasuga Taisha was established at the same time as the capital. Hundreds of bronze lanterns that have been donated by worshippers over the years can be seen here. If you’re visiting the Kasuga Taisha in February and August, you can see these lanterns lit during one of the two lantern festivals. Other places to visit on the grounds are the Kasuga Taisha Shinen Manyo Botanical Garden, Kasuga Taisha Museum, and Kasuga Primeval Forest.

If you’re visiting Todaiji Temple (#1) and Kasuga Taisha (#3), you’ll have the opportunity to visit one of the most beautiful attractions in Nara. Nara Park is home to many national sites as well as the symbol of the city: deer. Take the whole family to feed the deer with the deer crackers that you can purchase in the park.

When visiting Nara Park (#4), duck into the National Museum which showcases Japanese Buddhist art. You’ll be able to see Buddhist statues, paintings, ceremonial objects, and scrolls. It was first opened in 1889, and a new wing has been added to the original building since then.

Understanding the history of a country is a great way to enjoy further all of the sights that you’re seeing. This makes Nara National Museum one of the best places to visit to contextualise the various temples and palaces as spots of significance. 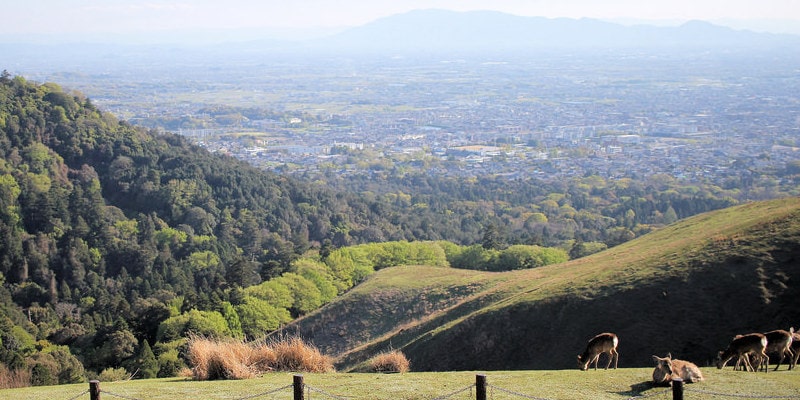 A grass covered mountain right behind Nara Park (#4), Wakakusayama is located between two other sites on this list, Todaiji Temple (#1) and the Kasuga Taisha shrine (#3). If you’re looking for a view of the city, this is the best place to visit. Mount Wakakusayama is open year-round except during the winter months. The initial hike to reach the mountain’s plateau is roughly 15-20 minutes.

If you want to reach the peak, you will need an additional 20-30 minutes. If you visit Nara in January, the fourth Saturday is when Mount Wakakusayama’s slopes are burned during an event called Wakakusa Yamayaki. Although the origin of the event is unclear, the fireworks display preceding the event indicate that it is celebratory.

Another famous Nara attraction is the Horyuji Temple. The temple, founded by Prince Shotoku in 607 to help with the early promotion of Buddhism in Japan is one of the oldest temples in Japan. Due to its significance, the Horyuji Temple was named a world heritage site in 1993.

The temple also houses the world’s oldest surviving wooden structures and if you are looking to see them, make sure you seek out the central gate (Chumon), main hall (Kondo) and a five-story pagoda. They’ve been renovated several times over the years, so they are in good working order. Although the Yakushiji Temple appears to have six stories from the outside, it actually only has three stories. Its history is similar to the other temples in Japan. An emperor built it on behalf of a family member. In this case, it was for Emperor Tenmu’s sick wife in the 7th century. It follows a strictly symmetric layout and has been rebuilt in 1970 since it was destroyed in a fire. 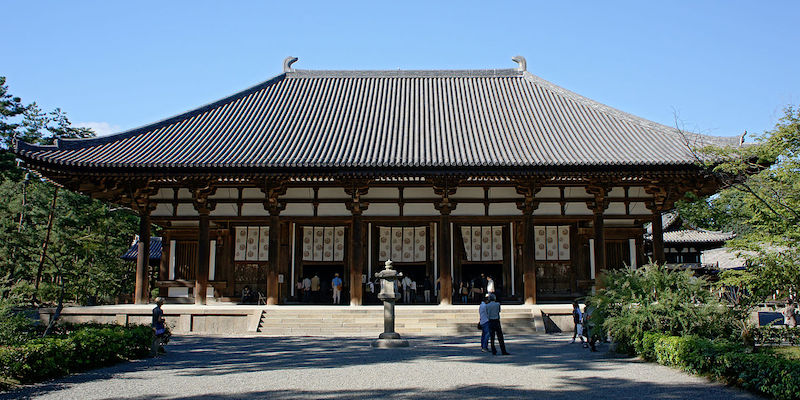 Toshodaiji Temple is a little bit more unique regarding its story. It was built in 759 by a Chinese priest who came to Japan to train priests and improve Japanese Buddhism. The temple’s main hall was recently renovated in the last 10 years. Enjoy a beautiful walk through the grounds as the temple has many paths that allow access to surrounding nature.

Founded during the Nara period, the Shin-Yakushiji Temple is devoted to the patron of medicine in Japanese Buddhism. Shin-Yakushiji means the “new Yakushi Temple” because there is already an existing one. Enter the main hall to see life-size statues of the 12 guardian deities. While the temple used to include several buildings when it was initially built, it’s now only left with the main hall.

The Kofukuji Temple used to be the family temple of the Fujiwara. They were powerful and aristocratic during the Nara and Heian Periods and built the temple in 710. The temple once consisted of over 150 buildings. The five-storied pagoda is Japan’s second tallest pagoda, which makes one of the most significant attractions in Nara but unfortunately, the central hall was destroyed in a fire around 300 years ago.

Yoshikien Garden is on the same grounds as the Kofukuji Temple’s former priest residences, situated right beside the Yoshinogawa River. Once you’re within the grounds, you’ll be able to see the pond garden, tea ceremony garden, and moss garden. Located just across the small river is the Isuien Garden (#11) which showcases more Japanese gardening techniques.

While many of Nara’s main attractions date back to 700, the Isuien Garden has a much shorter history. It has two parts to it, the front garden and the rear garden. The front garden dates back to the 17th century while the rear garden was built in 1899. In the garden, you can see a number of ponds, tea houses, and a museum displaying a personal collection of pottery, mirrors, artefacts from ancient China and Korea, and seals. 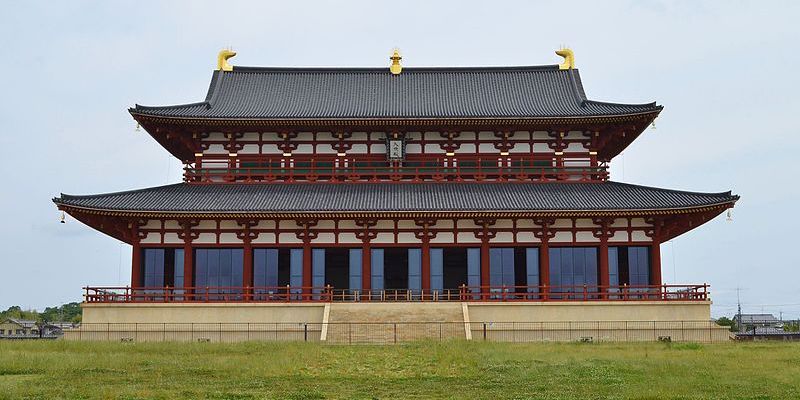 When Nara was the capital of Japan, it was known as Heijo-kyo. The Heijo Palace was the emperor’s home and also served as government offices. This most important and significant attraction in Nara (due to its history as the first permanent capital of Japan) is now a UNESCO World Heritage Site. The palace buildings that were once the centre of the capital were eventually destroyed, and the single hall that remained was moved to Toshodaiji Temple.

When the capital moved, people moved along with it, and for a period of time, the former palace grounds were used as rice fields. Today, there has been intense interest in rediscovering and celebrating Nara’s past. They have even reconstructed major structures of the palace complex which you can visit.

Naramachi is a former merchant district in the city. Today, you can see the preserved warehouses and browse the warehouses, restaurants, cafes, and museums. However, before it was a merchant district, Naramachi was home to the Gangoji Temple. This was one of Japan’s most important temples. While only a few of the temple’s once-sprawling buildings are still present today, this Nara attraction has been registered as a UNESCO World Heritage Site.

As a former capital of Japan, there are indeed many significant attractions in Nara. It’s full of temples (more than you can expect to see in one trip), museums to contextualise all of its histories, and breathtaking gardens and parks to stroll in. The best way to spend time here is taking in its historical background and enjoying everything the beauty that its nature has to offer.

Its location provides easy access to both Kyoto and Osaka, which makes it the perfect weekend trip. Make sure you put Nara on your list the next time you visit Japan!